Gabriel Jesus should have been penalised for offside when he converted expertly nine minutes before half-time at Vienna’s Ernst-Happel-Stadion, but the Manchester City striker’s 10th goal in 17 international appearances stood.

Paris Saint-Germain star Neymar has spoken of fears over his fitness holding up following a broken metatarsal in February and he was forced to withstand some robust challenges before a wonderful solo effort made it 2-0 in the 63rd minute — his 55th international goal sending him level with Romario in third on Brazil’s all-time scoring chart.

Philippe Coutinho got in on the act six minutes later and the Barcelona playmaker also crashed against the crossbar as Tite’s side sounded a statement of intent ahead of Russia 2018.

Brazil begin their World Cup campaign against Switzerland in seven days, safe in the knowledge that star man Neymar, who lasted 84 minutes, and his esteemed supporting cast are in fine order.

There were brief fears for Neymar early on when Austria captain Julian Baumgartlinger trod on his ankle.

Austria’s attacks were generally focused on shifting possession quickly towards centre-forward Marko Arnautovic and, when David Alaba’s cross evaded the West Ham attacker in the 19th minute, Alessandro Schopf was unable to slide home at the back post.

Reported Manchester United target Arnautovic then scuffed a shot into the turf and over from 10 yards after Schopf and Stefan Lainer picked apart an uncomfortable looking Brazil backline. 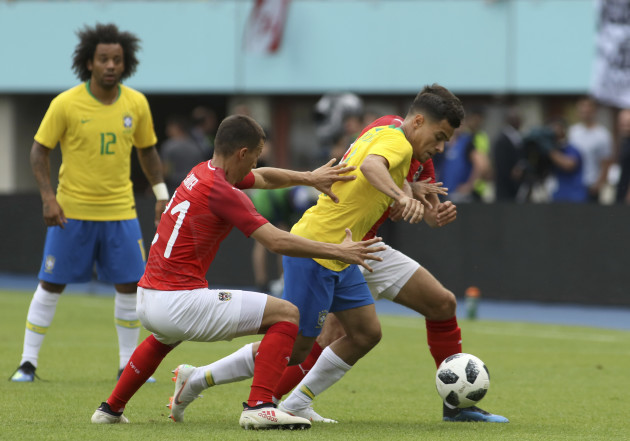 Coutinho skips past a couple of challenges.Source: Ronald Zak

Coutinho drilled a low, long-range effort that drew a fine save from Heinz Lindner and the Austria goalkeeper brilliantly denied Paulinho with his feet shortly after Thiago Silva planted a Neymar corner wide.

The pressure told in the 36th minute when Marcelo’s speculative shot hit Casemiro and fell for Jesus, who finished with ice-cool precision despite replays suggesting he was fractionally offside.

A last-ditch sliding block from Aleksandar Dragovic prevented Willian from setting up Jesus for a second seven minutes after the restart.

There was an altercation following that challenge and some further strong tackles – a crude clump from the already-booked Schopf on Coutinho coming immediately after Sebastian Prodl felled Neymar – sent tempers to boiling point.

Brazil took their frustrations out constructively and Neymar forced Dragovic to ground against his will, sitting centre-back down and coolly slotting home.

The Selecao began carving Austria apart and, after Paulinho rifled a low effort too close to Lindner, Coutinho streamed on to a pass from Jesus’ replacement Roberto Firmino and clipped in number three.

Lindner was a spectator as Coutinho sent one of his speciality strikes thumping against the bar, while his underworked opposite number Alisson tipped behind from substitute Stefan Hierlander in the 81st minute – preserving a fifth consecutive international clean sheet before Neymar departed late on to a warm ovation.

NFF to move into new secretariat next week

Photo of the Week