Rape: Nigerians are confronting an under-reported Crisis that’s spiked during the Lockdown

When Seyitan Babatayo tweeted on June 3 that veteran Afrobeats pop star Dbanj raped her in 2018, she might have been expecting he could sue her for defamation of character but probably not that she would be arrested by the police who she claimed proceeded to intimidate her.

Following an outpouring of support and outrage from Nigeria’s civil society groups and social media users, Babatayo regained her freedom two days later on June 18 but not before deleting the accusatory tweets about Dbanj, 40, whose real name is Oladapo Oyebanjo. In addition a tweet with Dbanj’s photo was posted on her account alongside a reconciliatory caption, a move many suspected was coerced.

But late on Tuesday (June 23), Babatayo released a statement claiming four police officers, pretending to be delivery men, arrested her in her home without a warrant, and after 48 hours in jail, Dbanj’s team took her to an undisclosed location, where they made her sign a gag order. 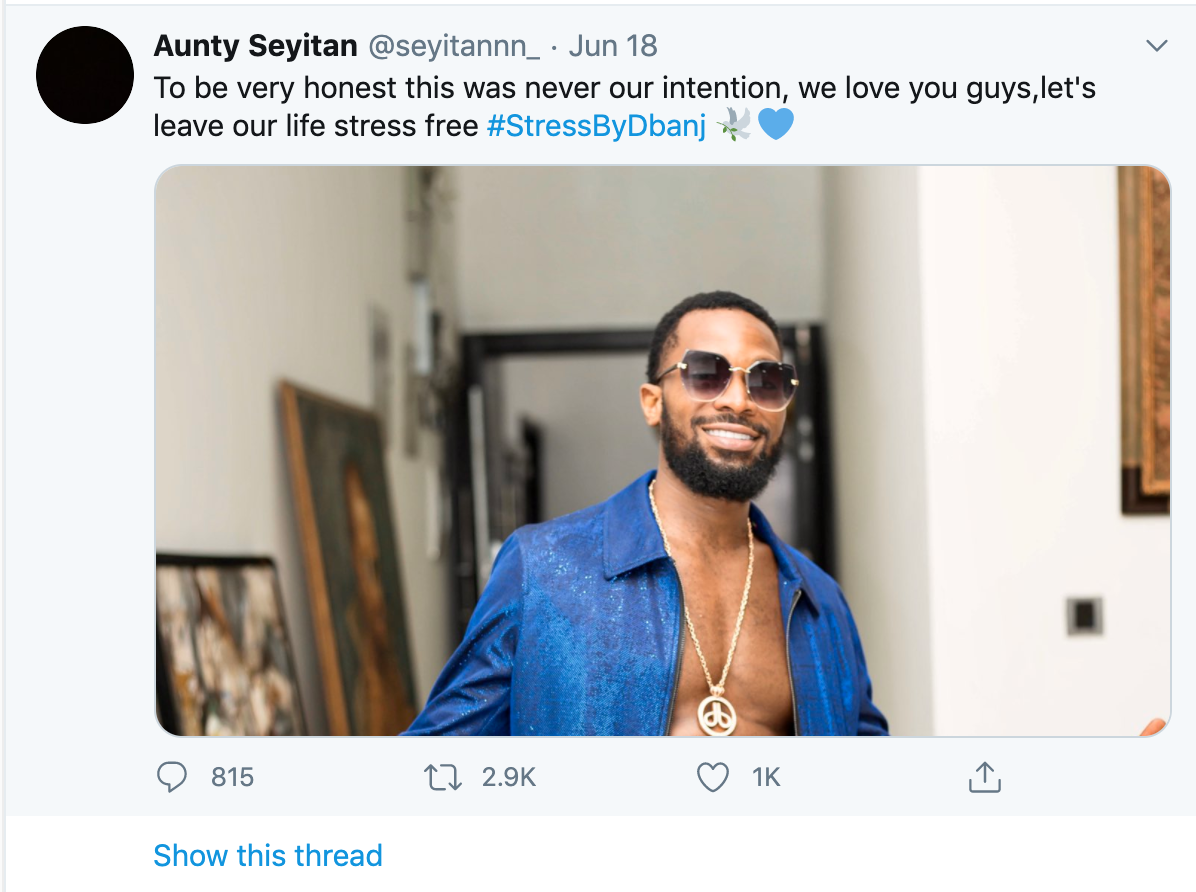 “I was isolated from my family, coerced, pressured and intimidated in person by Dbanj and his team to retract all statements and to announce that my testimony was a publicity stunt,” wrote the final year university student in her press statement, adding that she is not seeking financial compensation from the singer but an apology. She also alleges Dbanj, through his team, has continued to harass her via phone calls and boasted he can “buy off anyone within the justice system in Lagos.”

An Instagram post published the day earlier on Dbanj’s page showed him dancing and alluding to the police probe into the rape  allegation in song. The video’s caption read, “Innocent until proven guilty… STOP social media trial. Say no to rape and human rights violations.”

Neither party responded to Quartz Africa’s requests for follow-up questions.

The allegations against Dbanj have come on the heels of a series of several high profile rape cases which have shocked Nigerians.

According to the police reports, 717 rape incidents had been reported in the last five months during the Covid-19 lockdown, with vulnerable individuals trapped with their abusers. The month of June announced itself with the gang-rape and murder of 18-year-old Barakat Bello in her home in Ibadan, a city two hours from the Nigeria’s commercial capital, Lagos. Two days later, four masked men raped a minor in her home in Lagos.

The preceding month saw 11 men sexually assaulted another minor in the northern state of Jigawa, which was followed by the rape and slaying of 22 year-old university student Vera Uwaila Omosuwa on a church’s premises in Edo state in the south. Omosuwa’s death birthed the hashtag #JusticeforUwa, an abbreviation of her middle name, and became the inflection point for the “State of Emergency gender-based violence” protests organized in June in Lagos and Abuja, Nigeria’s capital city.

The demonstrators’ demands included the establishment of sustainably-funded sexual referral centers in Nigeria’s 36 states and the swift persecution of cases of sexual assault devoid of external pressures from affected parties.

One of the protest’s organizers, Oluwaseun Ayodeji Osowobi said the government reaction to the rally was different this time because of the specificity of their demands and their decision to strategically target defined stakeholders from governors to human rights activists.

“We sent a memo to [house of representatives] for them to adopt the resolution, which was done,” says Osowobi, founder of the non-governmental organization Stand to End Rape. “We also sent a memo to the Nigeria Governors’ Forum (NGF), asking they declare a state of emergency.”

Based on these efforts, Nigeria’s vice president Yemi Osinbajo convened a virtual meeting with the National Human Rights Commission on Friday to discuss sexual violence, and in a subsequent tweet announced a commitment to encourage states yet to ratify the two federal laws protecting women and children from violence to do so, mirroring an earlier statement by the NGF.

Powerful state governors have also thrown their weight behind the cause by agreeing to declare a state of emergency on rape and adopting a sex offenders’ register in a communique. Also, states like Bauchi in northern Nigeria have started the process of adopting the Violence Against Persons Prohibition Act, where it’s passed the second reading at the state house of assembly.

Another organizer of the protest, Chioma Agwuegbo, argued the recent uproar on sexual violence wasn’t just another fleeting social media moment in which public interest would rapidly waned. To stress her point, she referenced the co-ordinated protests organized in various cities against Biodun Fatoyinbo, a well-known Nigerian pastor accused of rape in 2019.

“The taste for advocacy is growing,” says Agwuegbo, executive director of the tech initiative for women, TechHer. “The conversation has changed and people are realizing they have power.”

But activists are quick to note the zeitgeist should not be interpreted as Nigeria’s #MeToo since sexual violence awareness already existed in the country.

“In Nigeria, ours is not a case of Me Too. It’s a chorus of no more [violence],” says Ireti Bakare-Yusuf, whose organization No More campaigns to end sexual violence against women.

Osowobi agrees. “We’ve had our MeToo moment for years [and] we’ve improved with more coordination.”

In light of the activism on and offline, the police chief announced the deployment of investigators to the gender desk dedicated to handling sexual violence cases. But anti-rape campaigners believe more should be done.

“Many [police officers] still don’t get rape,” says Bakare-Yusuf, who wants the police educated on the sexual violence and retrained to conduct investigations proactively. “I want the inspector general of Police to go: The next rape case we get in this country and I hear that it’s not being investigated, somebody’s head is going to roll. Then, we’ll begin to see a change.”

There’s also the issue of police officers maltreating survivors of sexual violence or insisting family members handle domestic violence incidents privately, which not only deters many from filing police reports but emboldens the perpetrator.

“We’ve seen the police being used as an instrument of intimidation,” says Agwuegbo. “We’ve also seen cases where the police act as mediator rather than enforcers of the law when they tell parents of minors that they should settle [with the abusers].”

According to the Ministry of Women Affairs and Social Development, two million women and girls in Nigeria are sexually assaulted each year. And while the statistics sounds daunting, there’s a concerted desire to fight the scourge due, in part, to the younger generation’s tendency to discuss topics traditionally considered taboo on social media and challenge attitudes that facilitate gender-based violence.

“The younger generation is willing to speak up because there is more awareness,” explained Osowobi, stating attitudes on sexual harassment have changed from in the six years since she started her NGO. “In the past, people felt groping in the market was okay, but not anymore.”

It’s a sentiment Agwuegbo shares. “This is a generation that says enough is enough,” she says, comparing the reticence of older Nigerians to the outspokenness of their younger counterparts, who have pressured brands into terminating endorsement deals with celebrities accused of sexual misconduct.

Another noticeable wave of positive change is the growing number of men now championing gender equality and women’s rights issues.

“We’re noticing more voices of young men, which we didn’t have before,” noted Bakare-Yusuf. “Men turn up for marches, speak up against rape, and challenge each other. And that, for me, is really uplifting.”

NASS Invasion: Why I ordered it – Lawal Daura